Come in to learn, go out to serve!

On Saturday 1 August 2015, a special gathering of gratitude, reflection and dinner was held at Jamia Al-Karam, as a first in a series of events to mark the thirtieth anniversary of the institution, celebrating its three decades of selfless work. Graduates of Jamia Al-Karam from various generations of students attended the programme and spent time in the company of their principal teacher, fellow students and the current community at Jamia Al-Karam.

The programme was also attended by Shaykh Muhammad Imdad Hussain Pirzada’s nephew from Pakistan, Pir Muhammad Mazhar Hussain Qadri (Mangani Sharif). During the programme, the Vice-Principal, Bakhtyar Pirzada al-azhari, delivered a talk highlighting the significance of Jamia Al-Karam in view of the contemporary and historical context of the Ahl al-Sunnah wa’l-Jama‘ah. On behalf of the graduates, Imam Sultan Mahmood from High Wycombe provided his reflection representing the very first class of Jamia Al-Karam who began in 1985 in Milton Keynes having the first lesson with the Zia-ul-Ummat, Justice Pir Muhammad Karam Shah al-Azhari (ra).

Following some thoughts from Pir Muhammad Mazhar      Hussain Qadri, Shaykh Muhammad Imdad Hussain Pirzada  addressed his students, the alumni of Jamia Al-Karam, with his  words of gratitude to Allah, the journey of Jamia Al-Karam and  his sentiments upon seeing the great work and achievements  being undertaken by those who studied under his care at Jamia  Al-Karam. Tribute was also paid to the noble wife of Shaykh  Pirzada, the mother of the institution, and her role over the past  three decades as well as her care and attention towards Jamia Al-Karam and its students.A selfless service she continues with even today. In addition, tribute was paid to all those individuals who have contributed and supported the work of Jamia Al-Karam all these years. Prayers were offered for them – those alive today and for those who have passed away.

May Allah bless Jamia Al-Karam and all those associated with it. Amin. 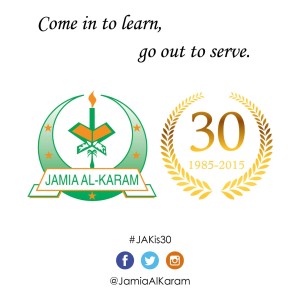