Skip to content
The name ‘Jamia Al-Karam’ can literally be translated as the institution of nobility and generosity. Both attributes of ‘nobility’ and ‘generosity’ come in the meaning of the Arabic word ‘karam’ and reflect the essence of Islam and its teachings as well as the character of the sublime Messenger, Prophet Muhammad (Allah bless him and grant him peace); and both are aspirations to work towards.

The name ‘karam’ is also a reference to the visionary inspiration behind Jamia Al-Karam, namely the late influential scholar Diya’ al-Ummat (the Ummah’s Luminary), Justice Shaykh Muhammad Karam Shah al-Azhari, who was the teacher and mentor of Shaykh Muhammad Imdad Hussain Pirzada, the founder of Jamia Al-Karam. It was his selfless dedication in serving the religion and the community with scholarly vision and heartfelt sincerity that led the way towards Shaykh Pirzada setting up the institution of Jamia Al-Karam.

The Ummah’s Luminary; A Legacy Continued

Justice Shaykh Muhammad Karam Shah al-Azhari (1918-1998) is an inspirational role model for scholars and scholars-to-be, whose contributions to the scholarship and intellectual traditions of Islam as well as services to the Muslims of the Indian subcontinent in the twentieth century are exemplary. Especially in a world embroiled by materialism and the pursuit of worldly power as well as undergoing major development in science and technological advancement. He was from amongst the scholars of Al-Azhar and was one of the leading academic, intellectuals and thinkers of the twentieth century. Coming from a family of spirituality, knowledge and righteousness, his personal journey in pursuit of knowledge took him through both major traditions of the present scholarship in the Muslim world; in the Indian subcontinent to Shaykh Sayyid Na‘im al-Din Muradabadi known as the ‘leader of intellectuals’, and in the Arab world to the historic Al-Azhar University and the tutelage of the renowned Imam Muhammad Abu Zahrah. Practical experience and witnessing of the changing world of the twentieth century, including the independence movements of Pakistan and India, and the Suez crisis of Egypt, gave him much insight into the modern age and of the prevailing human condition.

In 1957, he inherited from his father the leadership of a community of spiritual disciples as well as the intellectual tradition of the Dar al-‘Ulum Muhammadiyyah Ghawthiyyah (DMG) in Bhera, Pakistan, and thus he set about bringing his knowledge and experience to fruition and providing a leading service to the affairs of Islam and the Muslims. The Dars Nizami curriculum at the DMG was further enhanced with the introduction of English Language as well as political science and economics as taught subjects, and later the Ghawthiyyah Girls College (GGC) was too established. Today the DMG and GGC networks have over 250 affiliated branches throughout Pakistan educating over 25,000 male and female students at any one time, with thousands having graduated over the past decades.

Shaykh Muhammad Karam Shah al-Azhari is the author of the five volume Qur’anic exegesis, Tafsir Diya’ al-Qur’an, as well as the award-winning seven volume prophetic biography, Sirat Diya’ al-Nabi, which analyses the prophetic biography, historiography of past civilisations and the development of Orientalism. He also served as a Justice at the Supreme Court of Pakistan on the Shari‘ah Appellant Bench from 1982 until his death in 1998. He was a follower and Shaykh in the spiritual path of the Chishti Tariqah. He served the faith of Islam and the Muslims in many spheres of life including academia, education, journalism, judiciary, literature, oratory and spiritual guidance. Leading scholars of his time testified to his spirituality and revivalism. In terms of spirituality, seeking the pleasure of Almighty Allah, possessing tremendous love and devotion towards the sublime Messenger Muhammad (Allah bless him and grant him peace), concealing one’s own state and sheer steadfastness upon the truth were among his great attributes. Thus he was widely known as Diya’ al-Ummat, the luminary and light of the Islamic community.

Upon his guidance, his student and spiritual vicegerent (khalifah), Shaykh Muhammad Imdad Hussain Pirzada, came to the United Kingdom in 1974 and later established the institution of Jamia Al-Karam. Shaykh Muhammad Karam Shah al-Azhari inaugurated Jamia Al-Karam in 1985 and also the new campus of Eaton Hall in Retford in 1995. Over the latter years of his life, he spent many days and weeks at Jamia Al-Karam delivering discourses and inspirational wisdoms whilst also writing chapters of his prophetic biography.

Shaykh Muhammad Karam Shah al-Azhari was awarded the Al-Azhar lifetime achievement award, the al-Dir‘ al-Fakhri (Shield of Pride), in 2001 which was presented by the then President of Al-Azhar University, Dr Ahmad ‘Umar Hashim, in a ceremony at Jamia Al-Karam to his son, Shaykh Muhammad Amin Ul Hasnat Shah, who is the current Principal of the DMG and GGC educational institutions. In 1998, the leadership of this intellectual and spiritual community landed on the shoulders of Shaykh Muhammad Amin Ul Hasnat Shah, who plays a key role in providing guidance through his selfless hard work, dedication and insight, particularly concerning the affairs of Islam, the Muslims and the wider communities in the Indian subcontinent. 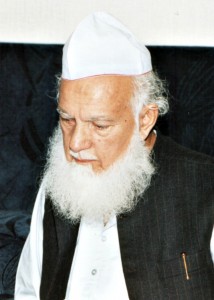