“Our elders planted date palms
and we ate their fruits.
If today we do not plant these
date palms, from where will
our coming generations eat?”
Shaykh Muhammad Imdad Hussain Pirzada – Founder and Principal

For details regarding academic study and how to apply for a place, visit our ‘Admissions’ page.

Support Jamia Al-Karam by donating here and invest in a bright future through education and knowledge.

Ensure you have subscribed to our mailing list to keep up to date with the latest Jamia Al-Karam news.

An obligation to purify one’s wealth by giving 2.5% in charity - After faith and prayer, this is the third pillar of Islam Zakat is a [...] 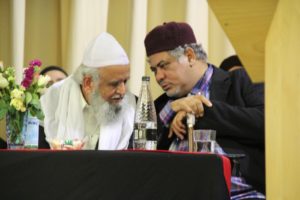 Condolence on the passing away of Dr Fuad Nahdi

Shaykh Muhammad Imdad Hussain Pirzada expresses deep sadness at the passing away of a brother and friend, Dr Fuad Nahdi, and, on behalf of everyone [...]

Today is the 12th Rabi’ al-Awwal. On this occasion of the blessed Mawlid in today’s world, the words of Shaykh Pirzada are worthy of continuous reflection. ... See MoreSee Less

From his office at Al-Azhar Al-Sharif in Cairo, the Grand Imam of Al-Azhar, Dr Ahmad al-Tayyeb Shaykh al-Azhar, chaired an emergency meeting of the Muslim Council of Elders through video conference in order to discuss the recent systematic hate campaign targeting Islam, its Prophet Muhammad (peace be upon him) and its sacred and religious symbols under the banner of freedom of expression.

During the meeting, the Council strongly denounced the murder of a French teacher as well as the attempted murder by stabbing of two Muslim women under the Eiffel Tower in Paris, stressing that all brutal assaults are acts of terrorism regardless of the identity of the perpetrators or their motives.

The Council expressed its utter rejection of using 'freedom of expression' as a pretext for insulting Islam’s honorable Prophet (peace be upon him), stressing that freedom of expression should be practiced with a sense of social responsibility, with the aim of preserving the rights of others and ensuring that religions would not be bargained for political gains.

Moreover, the Council reiterated its call to Muslims living in the West to continue to adhere to the values of coexistence, peace, citizenship and human fraternity in their respective countries. It also called on Muslim communities to continue to integrate positively within their communities in a way that contributes to the development and flourishing of these communities while preserving in the same time their cultural and religious norms and identities.

The Council also warned Muslims living in western societies against responding to the provocations of the far-right groups’ rhetoric distorting the image of Islam, flaring up hatred of Muslims and stereotyping Islam as a religion of terrorism and isolation.

In conclusion of the meeting, the Council decided to establish an international legal committee responsible for filing a lawsuit against the French magazine Charlie Hebdo, which published the cartoons insulting the honorable Prophet (peace be upon him) of Islam. The Council also voiced its firm belief that such insults are best confronted through peaceful, sensible and legal means, adding that 'actions speak louder than words and it is time to take a legal action'.

"Indeed we are for Allah, and to Him we are to return."

With profound sadness and grief, Shaykh Muhammad Imdad Hussain Pirzada, expresses his heartfelt sorrow, condolences and prayers at the passing away of the noble elder and Muslim leader, the Pir of Sial Sharif, Khwaja Muhammad Hameed-ud-Din Sialvi (ra) of Sial Sharif, Pakistan.

Upon the passing away of his saintly father, the Shaykh-ul-Islam, Khwaja Muhammad Qamar-ud-Din Sialvi (ra) in 1981, Khwaja Hameed-ud-Din (ra) served the intellectual and spiritual legacy of his illustrious forefathers and remained a beacon of light and guidance for thousands of devotees across the world. He was a pillar of the Chishti Nizami Sialvi Tariqah, and his departure leaves a void that will be difficult to fill. May Allah Almighty shower his soul and grave with countless blessings, and grant him a high station in Paradise. Amin ... See MoreSee Less